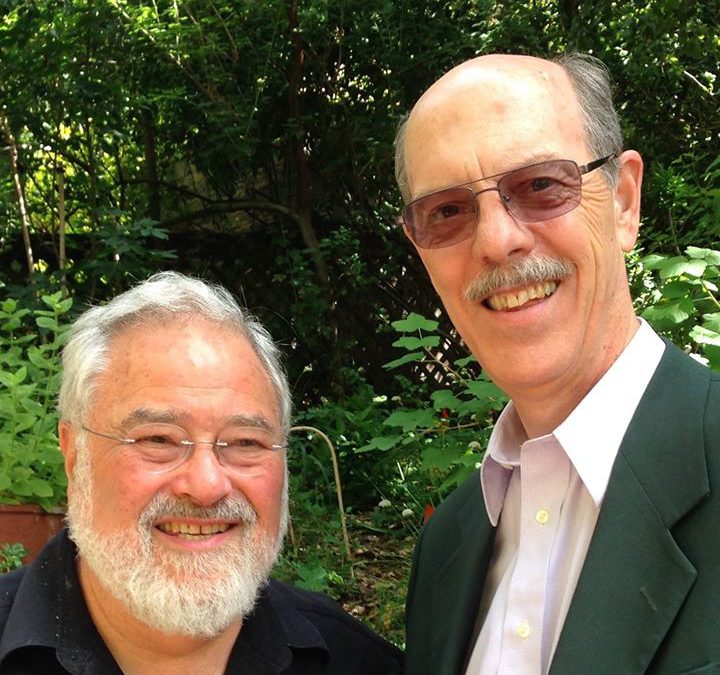 Experts help us know our values and reframe the debate.

Our #1 priority is to promote the application of the insights of the cognitive scientist and linguistic expert, Dr. George Lakoff. Our communities of practice, neighborhood Empathy Surplus Congresses, are dedicated to advancing the core American values of empathy and responsibility as governing principles for effective public government and progressive markets in the spheres of influence of our participants.

From Rockridge Nation to Workplace

In 2005, Charles Watts, founder, and president, first met Dr. Lakoff by phone through Watts’s participation with the Rockridge Institute. That year Rockridge Institute launched “Rockridge Nation,” an online community, and Watts served on the advisory board. Then, like now on Workplace by facebook, the on-line community was a place for progressives to become better caring citizen thought leaders through collective education.

Since then, Dr. Lakoff has given Empathy Surplus Project (ESP) permission to re-publish all of Dr. Lakoff’s articles on our blog and list serves. When Empathy Surplus Congresses convene part of their agenda is to discuss a book, audio, or video by Dr. Lakoff and practice how to apply what learnings come of it to their spheres of influence.

Dr. George Lakoff is Richard and Rhoda Goldman Distinguished Emeritus Professor of Cognitive Science and Linguistics at the University of California at Berkeley, where he taught from 1972 to 2016. He is now the director of the Center for Neural Mind and Society, Berkeley, California.Dr. Lakoff taught at Harvard (1965-69) and the University of Michigan (1969-1972). He graduated from MIT in 1962 (in Mathematics and Literature) and received his PhD in Linguistics from Indiana University in 1966.

Conservatives, through their think tanks, figured out the importance of framing, and they figured out how to frame every issue. They set up training institutes. – George Lakoff, Don’t Think of an Elephant

During the 1980’s, Dr. Lakoff was asked by various institutions to study various social and political questions from a cognitive linguistics perspective. In late 1990, just before the start of the First Gulf War, he wrote “Metaphor and War,” analyzing the metaphors of both George H.W. Bush and Saddam Hussein, revealing a metaphor conflict that ruled out any compromise. He also showed how Bush used a metaphor switch in October 1990 to convince the country to go to war in the Gulf, and outlined the metaphorical narrative under which the war was to be conducted. The paper, which could not be published in the normal media, became the first paper on politics to encircle the globe via the internet.

After conservative Republicans took over Congress in 1994, Dr. Lakoff realized that the liberal/conservative split in the US was due to different world views, and not generally understood by the public. Since understanding different world views is a subject for cognitive science, Dr. Lakoff set about studying it using cognitive linguistics, neuroscience, and neural theory of language (NTL) computation research. In 1996, he published Moral Politics, which demonstrated that the worldview difference arose from the application of the widespread Nation-as-Family metaphor to two different idealized views of the family — a strict father family for conservatism and a nurturant parent family for liberalism. The basic result was that, from the family-based moral world views, one could predict with considerable accuracy not only which policies conservatives and liberals would tend to support, what language would be used, but also what the logic is of apparently “irrational” positions, such as how conservatives could be pro-life and for the death penalty. Moral Politics was widely read and led in 1997 to the formation of a small think tank, the Rockridge Institute, in which George joined with seven University of California colleagues in the social sciences.

Between 1996 and 2000, George began popularizing the application of morally-based conceptual frames in politics, analyzing why conservatives were outdoing liberals and how liberals might do better at communicating their moral views and positions on issues. “Framing” meant the using of frame semantics in everyday thought, with the associated language. George proposed using that knowledge to effectively present one’s moral beliefs and their consequences for policy. In 2002, George published the second edition of Moral Politics, critiquing the Gore campaign of 2000 and analyzing Bush’s success. That edition was used as a guide by Howard Dean in his 2004 campaign for the presidential nomination.

Dean publicized the book, which led to George being asked to speak to two Senate Democrats’ retreats, two House retreats, and caucuses of both Senate and House Democrats. It also led to grants for the Rockridge Institute, which put out a large number of framing studies between 2003 and 2008. During that period, George wrote four books on politics: Don’t Think of an Elephant! (2004), Whose Freedom? (2006). Thinking Points (with the Rockridge staff, 2006), and The Political Mind (2008). Those books fleshed out in detail the analysis done in Moral Politics, adding crucial details.

Conservatives figured out how to bring their people together. – George Lakoff, Don’t Think of an Elephant

Don’t Think of an Elephant! applied frame semantics to explain in simple terms how framing worked.

Whose Freedom? used the theory of contested concepts that the Strictness vs Nurturance analysis to explain in full detail what different ideas conservatives and liberals have when speak of “freedom?”

Thinking Points focused on “bi-conceptualism” — the discovery that there is no ideology of the “middle,” the “center,” or independents, but rather that many people have both conservative and liberal moral systems applied to different issues.

It also explained that elections are not just matters of who has the better policies but instead focused on values, communication, authenticity, trust, and identity. Where the other books backgrounded the use of cognitive science and neuroscience, The Political Mind brought it front and center, explaining in readable scientific terms why Enlightenment Reason and the Rational Actor model got in the way of liberalism, and why conservative and progressive moral systems are likely to keep arising throughout history because of the way the neural system gives rise to certain metaphors and not others.

The Political Mind also takes up the study of narrative structures, their emotional aspects, and how they are used metaphorically. Don’t Think of a Sick Child: The Logic of the Health Care Debate provides an excellent overview of the debate over reform. It was written by George Lakoff, Glenn W. Smith, Eric Haas, and Scott Parkinson at the Rockridge Institute.

What unites progressives? (from Don’t Think of an Elephant)

First, values coming out of a basic progressive vision.

Empathy, responsibility for self and others, and strength are the core American values behind the UN Charter Preamble’s call “to promote social progress and better standards of life in larger freedom.”

Use human rights principles of universality, equity, accountability, transparency, and participation to frame all policy.

Words Progressives Can Begin to Use Today

ETHICAL BUSINESS vs CORRUPT BUSINESS to distinguish from simply “business”

PUBLIC GOVERNMENT OF, BY, AND FOR PEOPLE vs simply government